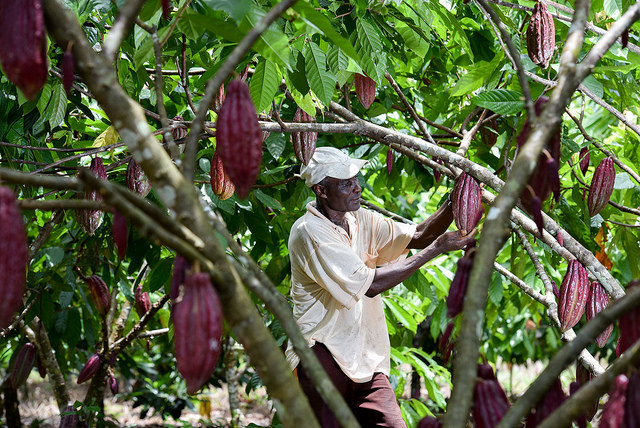 We are now almost a year into the European Union (EU) regulation that has established new guidelines for how much cadmium is allowed in chocolate and cocoa powder sold to final consumers in the EU. The biggest impact is felt by smallholder farmers, cooperatives, and exporting companies of specialty beans and powder in South America. These regions, where cacao is a native plant, are renowned for fine flavor beans. Farmers in affected areas now receive lower prices for their product while also facing higher costs for lab tests and for the implementation of mitigation measures. In this blog post, we discuss options for cadmium mitigation based on scientific research and advise what buyers of cocoa beans can do to support farmers in the affected regions.

Regulation 488/2014 applies to several food groups containing cadmium that are consumed in Europe, including chocolate and cocoa powder. Why? Because cadmium, a metal, accumulates in the human body over time and is classified as a carcinogen, linked to kidney damage and bone weakening. Cadmium occurs naturally in soils and can be absorbed by plants, such as cacao trees. EU regulation restricts cadmium in chocolate powder or sweetened cocoa powder that is sold to the final consumer. None of the categories for which maximum levels have been established applies to the raw material (cocoa beans or nibs), nor to cocoa powder sold for food processing. In most studies that have investigated levels of cadmium in beans, a safe maximum level of 0.6 or 0.8 mg/kg cadmium per kilogram of peeled beans is assumed. In some cases, however, buyers refrain from purchasing beans exceeding 0.3 mg/kg. This makes sense when beans will be processed into cocoa powder for final consumption, because cadmium goes into the solid parts of the bean, which make up about 50% of the bean weight, and not in the fatty components. Beans with 0.3 mg/kg cadmium therefore end up producing cake or powder with a concentration of 0.6 mg/kg, which is the maximum permissible level for cocoa powder sold to consumers in Europe. Maximum cadmium contents in beans are usually part of the agreement between the buyer and the supplier. When the intention is to make chocolate, it is recommended to first make a calculation, based on the recipe, to determine a safe level of cadmium in the nibs or beans used in order to ensure the final product will comply with the regulation.

Implementation of the EU Regulation

Each EU member state is responsible for the implementation of the regulation in its own country, with the EU as general auditing body. Controls are carried out at EU borders or in supermarkets. The company that brings the chocolate to the market is responsible for complying with the European rules. Actions that the EU has undertaken since the early 2000s include: informing recipients, rejecting lots at the border, recalling and destroying products. The Rapid Alert System for Food and Feed (RASFF) informs consumers about food recalls and sends food safety warnings. So far, there have been no fines imposed on chocolate makers when a product has been removed from the market.

What Causes Variation in Cadmium Levels in Beans?

Soil naturally differs in total cadmium levels depending on geological origin, soil formation, and erosion. Sediments can be transported over large distances by river. Contamination of soils and water through mining or certain industrial activities can also play a role. Frequent use of fertilizers with high cadmium content (phosphate) may contribute as well, although smallholder producers generally use few fertilizers because they are expensive. The amount of cadmium that can be taken up by cacao trees is more important than the total level of cadmium in the soil, because not all cadmium is bioavailable, i.e. present in a form that plants can take it up. The amount of available cadmium in the soil depends on several soil properties, such as the soil acidity and the amount of organic matter (decomposed plant materials) in the soil, but also on the type of cacao (in other words: the variety). Cacao trees in general can have a high cadmium uptake capacity, although a study by the Cacao Research Center in Trinidad has shown that different cacao varieties grown in the same location under similar soil and climate conditions accumulate cadmium in beans to a different extent.

Average cadmium levels in cacao beans from a large part of South America are higher than elsewhere, but strong variation exists between different locations. As of now, it is not possible to make reliable predictions based on the total soil cadmium content alone, although progress is being made by scientists to predict risks of high cadmium accumulation in beans based on a wider characterization of soil and plant properties. High concentrations in the leaves may indicate high bean concentrations at an early stage, but are an estimation at best. Finally, cadmium contents in beans can vary to some extent from year to year due to changing weather and soil conditions, with the genetic characteristics of the cacao tree, and with age of the plantation.

Analysis of cadmium in beans is therefore recommended after each harvest, and ideally at the plot level, until a farmer has a better understanding of the variation in bean cadmium levels between different harvests and plots. This presents farmers with additional costs, which is a huge challenge for smallholder farmers. A related issue that requires further attention is the need to invest in the capacity of laboratories in the region to reliably assess cadmium levels in beans, soil and fertilizers.

What Can Farmers do to Reduce Cadmium Levels in Beans?

The first thing farmers can do is to get good insights into the cadmium contents of their beans and mix or blend where possible, e.g. at the cooperative level, to reduce the cadmium content to a safe level. Higher concentrations of cadmium are normally found in the shell compared to the nibs, so it is recommended to analyze the cadmium levels in the peeled beans, representing the raw material that is used for manufacturing of the final product to which the regulation applies. Farmers can modify soil conditions including reduction of soil acidity through liming, application of organic materials such as composts, manure, or biochar (a form of charcoal from plant matter), as long as these materials are low in cadmium and improve overall soil fertility.

Unfortunately, there is no one-fit-all solution for mitigation. Recommended application rates and materials are context specific, depending on soil conditions and the availability and costs of different materials at location. The general principle is that they bind cadmium in the soil or otherwise reduce the amount that plants take up. Ideally, these practices also increase soil health and cacao productivity, which may dilute cadmium levels in the plant. Another promising option is to make use of natural variation in cadmium levels in beans from different cacao varieties. Low cadmium accumulating genetic materials can be used in breeding programs, or as rootstocks for grafting. Although such adaptations will take time to have effect, it is important to start today.

Research, both on soil management as well as on cacao varieties, has potential to create multiple improvements in bean safety, productivity, and production sustainability. So far, little information exists about technologies that remove cadmium from the beans after harvest, during fermentation, drying or further processing, although research is being developed in this field as well. An exhaustive review of the status of research on cadmium in cacao  was recently published by Bioversity International. Another issue that requires further research is good sampling protocols for the assessment of cadmium levels in exported beans, as there are indications that current sampling protocols are not adequate to make reliable estimations of cadmium concentrations in cacao batches.

Although the EU regulation came into force in 2019, several larger South American exporters who sell directly to Europe have felt the impact on their sales much earlier. Maria del Pilar Gómez of Mariana Cocoa, exporter from Colombia, said: “sales have fallen since 2017 and we had to make large investments in order to do cadmium analysis in all the regions we buy from.” According to Gómez, there is a clear shift in the market as “higher prices are paid for cacao from areas without cadmium problems, which often also have lower quality of beans. Prices in high-cadmium areas have dropped, but buyers are asking us not to mix cacao from different areas of the country”.

Peru, leading exporter of organic cocoa and cocoa powder in South America, mainly sells to the Netherlands and Belgium. According to a source at Promperú, an promotion agency related to the Peruvian government, sales dropped in 2018 around 21% compared to the previous year. On the other hand, export to other Latin American countries and to Asia has increased. In Peru and Colombia, the uncertainty of future sales and prices also put a risk to programs that promote cacao as an alternative to the production of illicit crops such as coca, as part of a strategy to combat rural violence and drug-related conflict.

What Can Buyers and Chocolate Makers do?

To support smallholder farmers in affected regions we make the following recommendations to buyers and chocolate makers:

To support farmers, and to safeguard the future supply of unique varieties and exquisite cacao flavors, it is important that a sector-wide approach is mapped out to reduce the impacts through strong communication and actions based on a shared responsibility. A four-year project led by the International Center for Tropical Agriculture (CIAT) in Colombia, Peru, and Ecuador will address major knowledge gaps and build capacity. The project has started in December 2019 with support from the EU and provides a platform to involve partners and relevant stakeholders in research, dissemination, and co-development of mitigation actions.

This article was modified in December 2019 to include more detail on the relationship between cadmium levels in raw beans and various transformed products such as cocoa powder.